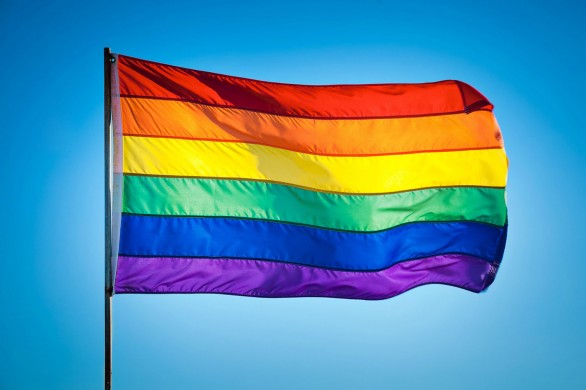 The rainbow flag (or pride flag or gay rainbow flag ) is currently the most widely used and known symbol of the gay liberation movement.
The 6 colours with red top and purple at the end is the version most commonly used, but the original version of San Francisco artist Gilbert Baker in 1978, had instead two additional strips: pink and turquoise .

The Gilbert Baker flag waved for the first time on June 25, 1978 during the Gay Pride parade in San Francisco.

After the assassination of Harvey Milk (U.S. gay liberation movement political and militant) on 27th November 1978 in San Francisco, the demand for the rainbow flags increased and Paramount Flag Company began to sell a similar model, without colour pink (shocking pink was not in stock), and in 1979 was also deleted turquoise, because when the flag was hung vertically the colour was clouded from the pole.

Since 1979, therefore, the most common version consists of six colours: red, orange, yellow, green, blue and purple “flying” horizontally, with the red stripe at the top and purple at the bottom, as in a natural rainbow.

These colours are now widely used in any type of object or material, to symbolize the LGBT pride, the gay community and solidarity to the ideals and objectives LGBT.