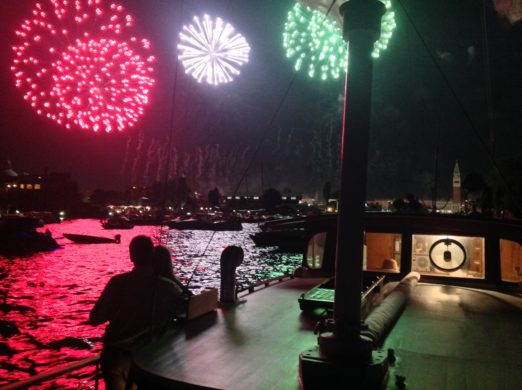 Saturday 14th July, as every year,  Ca’ Sagredo Hotel proposes for a limited number of people the “Redentore* Dinner Party” on bord of the “Silver Victory”.

A rich aperitif with mini appetizers and a 3 courses-menu. Beverages, service and of course, the *Redentore show included. Price per person Euro 220,oo.

*Venice, like other European cities, was periodically hit by the calamity of the plague. When in 1576 the terrible plague hit the city, Doge Alvise I° Moncenigo with the Government commissioned the famous architect Palladio to project a votive temple to the Redentore to be built on the Giudecca island as a petition for the end of the plague. A new wave of the deadly disease arrived and it finally ended in July 1577.  Therefore has been established that every third Sunday in July the Venetian should pay a visit to the Redentore Basilica on the Giudecca island. The Palladio’s church was finished and consecrated on the 27th of September 1592. Since then, every year to unable to Venetian to fulfil their row, a boat-made bridge is especially built which connects the city to the Giudecca island. Messes are celebrated all Saturday and Sunday on the third week of July. The Venetian still respect this tradition with a lot of enthusiasm. After the pilgrimage to the Basilica they all gather with their boats in front of San Marco Square to wait the water fireworks. This is one of the most unique and unforgettable show with Venice in the background.